We have now conducted the annual spawning fish count, and we're expecting that all catches are reported. We know that there is particulary interest in the numbers from the count this year, and in addition we'll add some figures we're hoping you will find interesting.

The spawning fish count
The count was conducted on the 28th of September, in cooperation with our usual biologist. The method is simply two persons floating downstream, counting the fish as they pass. The count is done all the way from Skoganvarre, and all rapids as far down as we have visibility (if we're unlucky, we have to stop by Tiensuu, but this was not the case this year, and we counted all the way down past the suspension bridge in zone 1).

After a rather poor season, the count came as a positive surprise, and our targets were also reached this year. That was really not a surprise, and though number were not record high, they were well within the margins we want and need. Another positive observation during the count, was that most of the female fish were particularly fat and healthy. When we, in addition see the occasional male closer to 30 kilos, rather than 20, it spices up things. Having said that, there is no doubt that there were fewer fish entering the river this year, and should we have caught 4 more tons, it's highly likely that we wouldn't have reached our targets.

The effects of release and protection of big fish
As a result of the poor catches, the board implemented extra-ordinary restrictions this summer, and protected all salmon larger than 80 centimeters as of the 6th of August. This led to many a big salmon being released. As pictured in the chart below, you can see that the number of killed (red column) and released fish (blue column) is close to the same in 2019. It is natural to assume that this distribution would have been closer to previous seasons, had the extraordinary measures not been imposed. In other words, it works. 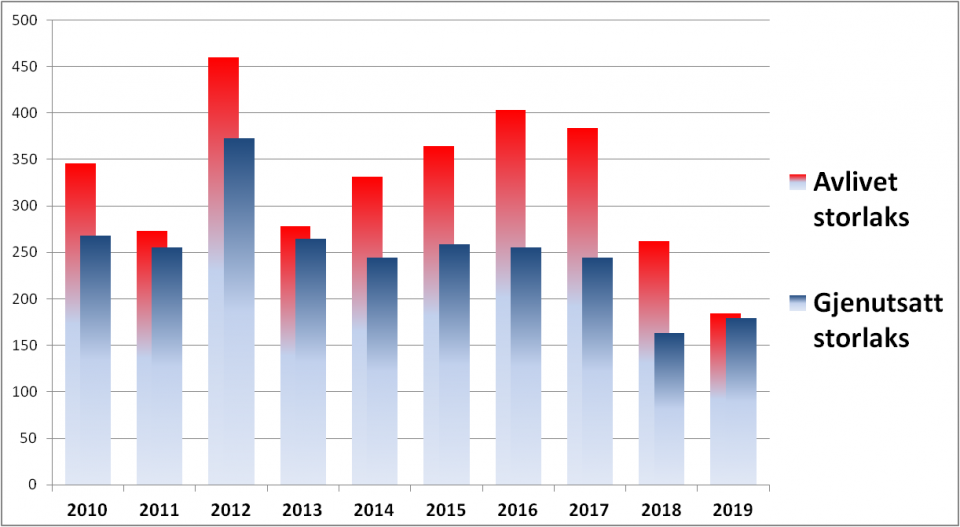 The chart below shows the percentage of catches split into the three weight groups (0-3 kg (green), 3-7 kg (black), 7 kg and larger (red)). As you see, the split between these groups are not out of the ordinary, despite the low return of fish. 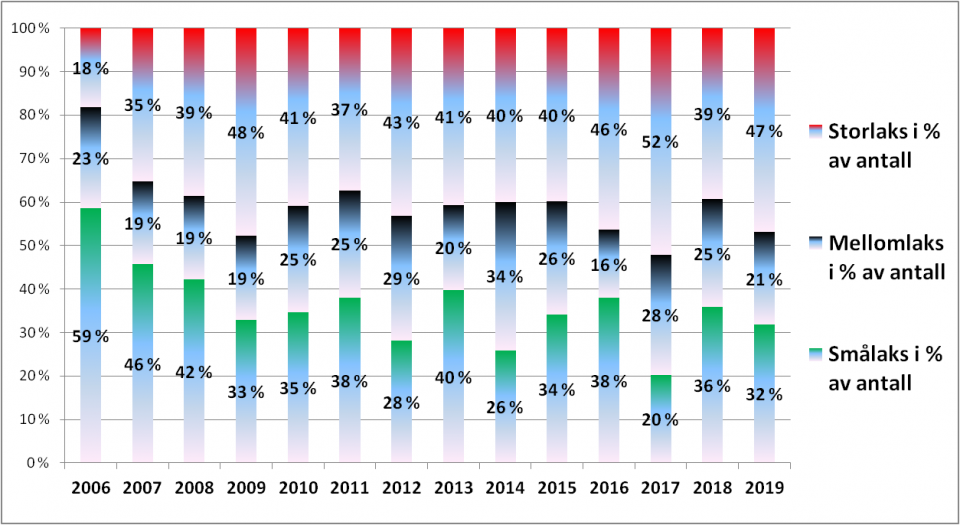 Even though there's handed in way to few scale samples compared to the number of fish being killed, it's interesting to analyze the information from the few we get. Salmon fishermen fishing in warmer parts of the world, might be used to a smolt age of one to two years. The chart below sums up when most of our salmon smoltify and leave the river for the benefit of the sea.

As you see, most of our fry spend four years in the river before they smoltify and go out to sea. It will be exciting to follow this numbers in years to come, and see if climate changes, with milder winters ang longer growth seasons during the summer, will lead to an increased weight, and the smolt age to decrease. 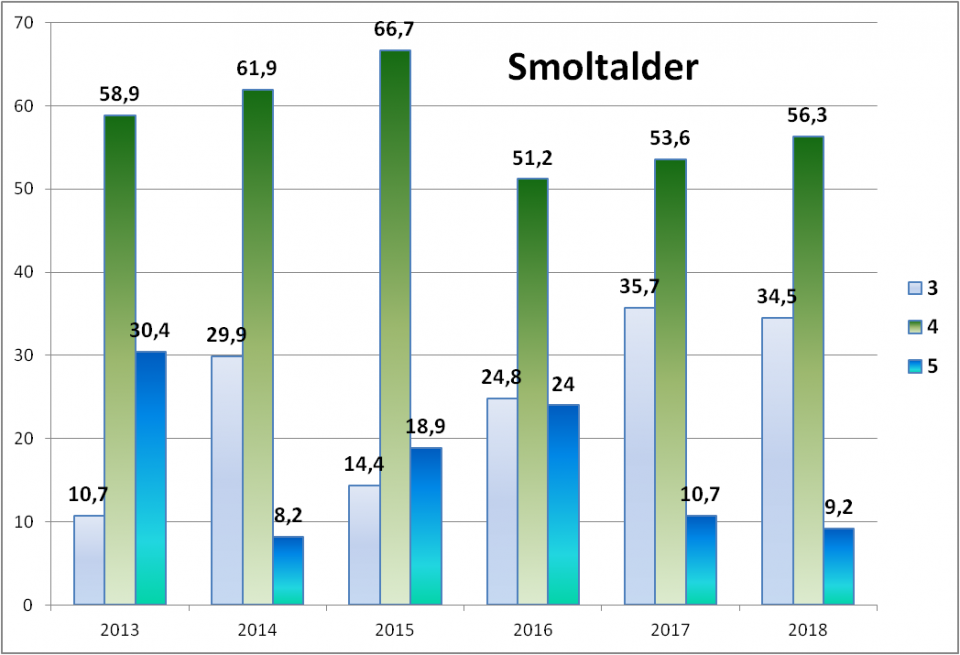 The sea trout catches in Lakselva vary, but if we look at the catches for a longer time period, the chart below shows a relatively stable development. As we can read from the chart, the total weight of caught sea trout was almost the same in 2019 as in 2018, but the number of fish were fewer. This means that the sea trout as well, were fat and sturdy, and the largest reported one, a rather respectable nine kilos. 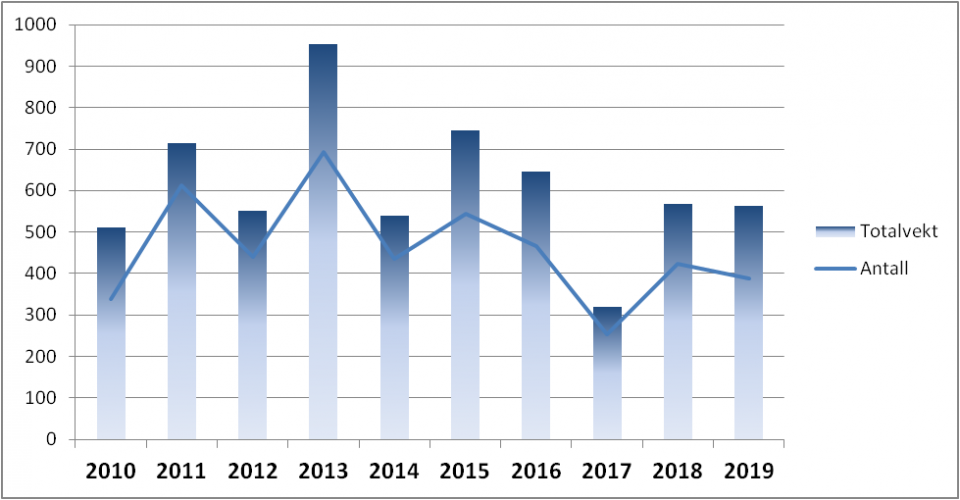 Vuollajohka
Vuollajohka is one of the tributaries to Lakselva, entering Lake Nedrevann opposite of the army base. Due to this river's relative inaccesibility, the drift count isn't conducted each year, However we found the time to do it this year, and did so on the 28th of September. Vuollajohka has a very varied river structure, ranging from large, lake-like pools, separated only by small pieces of rapids, to long stretches of rapids and white water. The area in which the river flows, is also very scenic, with the mountains towering on the west bank. 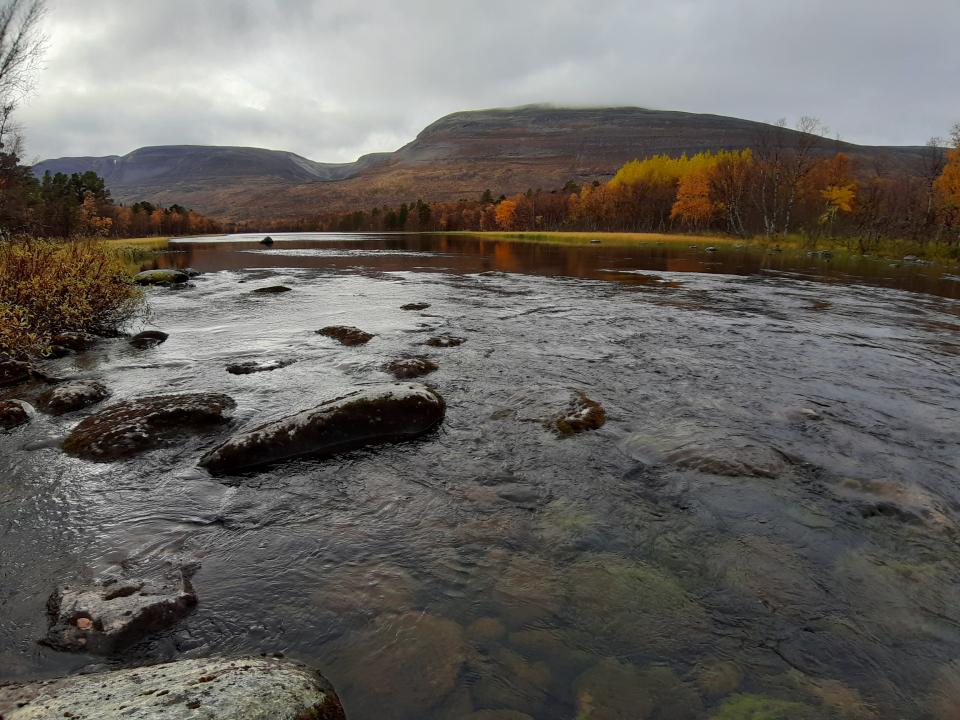 We have conducted several counts in Vuollajohka, and none of the times, have we observed any large numbers of salmon. It is an acknowledgement that this is not a particularly good salmon river, even though there is the occasional salmon being caught each season. However, it seem to sustain a good stock of trout and grayling.