As most of you may remember, Norway (and other salmon fishing parts of Europe) experienced a massive increase in catches of pink salmon in 2017. This came as a surprise to most, and since the pink salmon has a two year life-span, we are worried we might experience similar conditions in 2019.

It should be said that there has been sporadic reports of pink salmon in Lakselva since the 60s, when the Russians first started their release program on the Kola Peninsula. Also, Lakselva was not severely affected in 2017. This may change, and we do not want more of this species in our river. The pink salmon is a natural species in the Pacific Ocean, and an unwanted and blacklisted species in Norwegian waters.

There is a lot of uncertainty surounding how much pink salmon will affect our rivers and local stocks of fish. Eva B. Thorstad, researcher at Norwegian Institute for Nature Research, and several of her colleagues have summed up most of what we know about the pink salmon invation we experienced in 2017 in this scientific article.

Furthermore, here's some more information Eva conveyed through her Facebook some days ago.

Pink salmon can become very prolific, and even though they spawn earlier in the season than our native species of salmon, and additionally die quite soon after spawning, the combination of high numbers and aggressivity is thought to lead it into conflict with salmon, sea trout and sea char.

The fact that the pink salmon die shortly after spawning will contribute to an increased addition of nutrients to the river. This might be beneficial in a smaller scale, but with the possible high numbers of fish, it is thought that it may change the entire plant- and animal composition in the river. 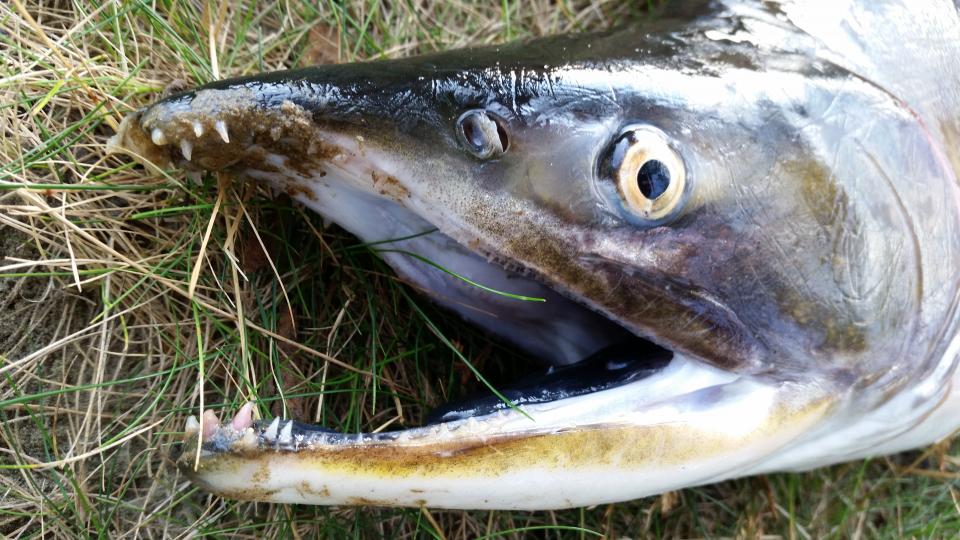 Pink salmon goes through a massive change when it comes close to spawning, and it probably wouldn't win any beauty contests. However, at sea and when entering the river, it looks similar to arctic char, and what separates them most from Arctic char at this time is the dots all over the tail fin.

Fry of pink salmon is known to leave the river quite fast after swim-up. However, in 2017, researchers found fry with food in their stomachs in surveilled rivers in Norway. This means that they compete with fry of our own stocks of salmonids in the critical phase just after swim-up. This may again give increased mortality for our local stocks of fish.

To sum things up, we do not know what to expect in 2019. We do know one thing though, and that is that we need an increased focus on this for the coming season - this includes all positive forces working for the best of the river. In our catch reporting system, there is a separate category for pink salmon, and we ask that all catches of pink salmon is reported here. We also ask that catches are reported directly to us, either by phone or e-mail. Then we will be given the opportunity to possibly remove any remaining fish from that same locality.

In advance, we want to thank you for your co-operation in this work!